Though one of the smaller of Britain’s ‘mainstream’ denominations, the United Reformed Church stands in the historic Reformed tradition, whose member denominations make up the largest single strand of Protestantism worldwide.

Theologically, the United Reformed Church is a broad church. Its membership embraces congregations of evangelical, charismatic and liberal understandings of the Christian faith – in a variety of mixtures!

St George’s Church, Hemel Hempstead.
As Hemel Hempstead is a “New” Town, the history of St George’s Church only goes back to the 1950s when the New Town was starting to be built. However the local Non-Conformist heritage goes back much further to at least the mid 1600s when one of the earliest Baptist Churches in Hertfordshire was established in the area, in Leverstock Green.

St George's Church was originally founded as a Presbyterian Church when in 1953 The Presbyterian Church of England purchased the site for the building of a church. In November 1954 a temporary hall was erected on the site, and the first service was held on Sunday 7th November. The Sunday School started with 6 children the following week on Sunday 14th November.

On February 5th 1955 The Revd Kenneth Bell was Inducted as the first Minister of the Church. The congregations were small but enthusiastic, with an average of 30 people attending the one service each Sunday, in the evening. On Easter Sunday 1955 the first morning Family Service was held. By December 1955 the Sunday School had grown so big that it had to be split into 2 sessions as there was not enough room in the temporary building for all the 197 children at once. The Sunday School and Bible Classes continued to grow, and by December 1956 the numbers had reached 276.

The first sod was cut on 7th April 1956, and the foundation stone (which can be seen in the main entrance porch) was laid on 5th of May 1956 by Mr Ernest Bartlett, and the building of the Church began. The church was finally Opened and Dedicated on Saturday 13th April 1957.

The building was designed by J Sebastian Comper, and was built by Jesse Mead Ltd of Chesham. It was initially designed to seat 275 - 300 people, although the normal capacity now varies between 100 - 150. The construction of the building is typically mid 1950s being mainly reinforced concrete and brick. The Manse adjacent to the church was also built around this time.

A significant development in the life of the church was the amalgamation in 2004 of St George’s with St Andrew’s URC, Berkhamstead. This has been brought about through falling attendance numbers at St Andrew’s, and culminated in their decision to amalgamate with St George’s.

On the Saturday 5th February 2005 St George's celebrated it's 50th Anniversary with a weekend of special events and activities, which were attended by 3 of it's previous Ministers, and by many old Members and friends.

The first Church Hall was built after the main building in about 1960, and the original “Cedar” Hall was then replaced by the current larger building in 1981. During the early 1990s, a redevelopment plan was considered for the site, including sheltered residential accommodation and a new church building. However due to various factors, this plan did not progress. In 2002 a new “Link Building” was constructed between the main Church and the Hall to provide easier access between the two main buildings. In 2006 it became apparent that the existing church hall was no longer adequate for our needs, and a decision was made to redevelop and enlarge the hall. In March 2008 the church hall was demolished, and in March 2009 the new large modern hall was officially opened by the Mayor of Dacorum Council.

In January 2015, Jane Wade left St George's in order to take up a new Ministry at Abington Road URC in Northampton.

Between January 2105 and July 2019 the church was without a Minister, but continued under the leadership of the Church Elders.

In June 2019 the church meeting decided to call Revd Dr Confidence Bansah to take up the Ministry at St George's and he was Inducted as our Minister on 27 July 2019.

St Andrew’s Church, Berkhamsted.
St. Andrew’s Church had its origins between 1780 and 1790. About this time, a Mr. Langston, a friend of Rowland Hill, came to live in the town and finding the religious life in the town “at a very low ebb and the religious services somewhat formal”; he opened his house for worship on Sundays. Numbers grew and a barn in Castle Street was acquired and fitted out for regular services.

Eventually a chapel, called the Countess of Huntingdon’s Chapel, was built, seating about 200 people. In 1810, The Revd J. Yockney, Minister at the time, founded in conjunction with the Minister of the Baptist Church, the first Sunday School in Berkhamsted. It was non-denominational and the teachers were paid one shilling for their services. Numbers reached 150 during the following three years, before the Parish Church and other local churches decided to provide Sunday Schools.

This Chapel was pulled down and in 1834 a new church was built, called the Independent Chapel. This was replaced in 1867 by a third building, which was used until the need for costly repairs forced the congregation to consider the future of the church. At this point a resolution was drafted proposing that the church should close. The alternative decision was however taken to sell part of the land to a housing association and build the present building, which was opened and dedicated in December 1979.

Since then, the congregation has been served by three Ministers, the Revds. Gareth Rees, Dorothy Havergal-Shaw and Jane Wade assisted for a time by the Revd. Janet Conway as Assistant Minister. Numbers in the congregation have fluctuated during this time, which included two lengthy vacancies, when the Elders were assisted the Revds. Henry Gordon, John Chisholm and Janet Flawn as Interim Moderators to maintain regular Sunday worship; teaching in the Junior Church and pastoral care of the congregation. In 1993 a joint pastorate was formed with St. George’s URC in Hemel Hempstead and the church was renamed St. Andrew’s URC at a service of rededication in 1998.

Over the next few years, however, falling numbers through the death of church members or relocation of family groups had not been matched by the slow increase of new members. At the Church Meeting in May 2003, with no Junior Church for some months and with an average congregation of 8 on Sunday mornings, the difficult decision had to be faced that they should close. After discussion with representatives of the Pastoral Committee the final decision taken by the Church Meeting was to amalgamate with St. George’s URC in Hemel Hempstead, of which the Revd. Jane Wade was also Minister. 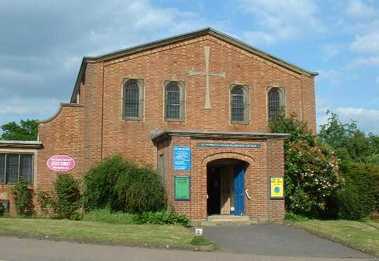